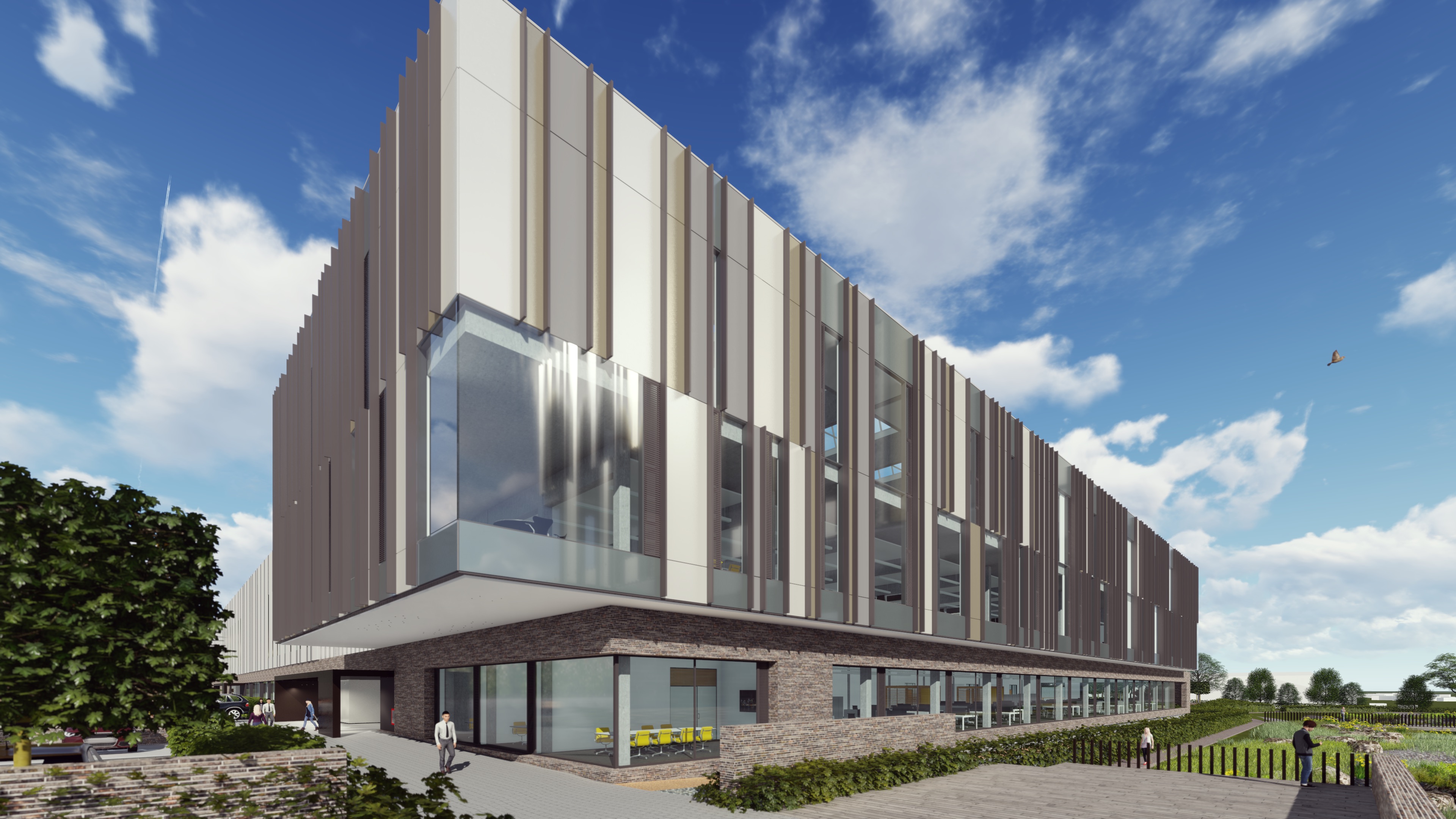 Studwelders Composite Floor Decks were chosen to deliver and fit over 9000 square metres of traditional MetFloor 55 steel decking to Romo Group's new headquarters near Mansfield.
Romo Group is a Nottinghamshire-based luxury fabrics designer and manufacturer, and their new 33,000 square metre HQ will consolidate their business operations onto a single site.

Studwelders was appointed to install over 9000 square metres of traditional dovetail re-entrant MetFloor 55 steel decking to the new HQ of Romo Group in Kirkby in Ashfield near Mansfield. The deck, manufactured by CMF, was in the thickest, 1.2mm guage of steel that MetFloor is manufactured in. MetFloor steel decking can be manufactured in 0.9mm, 1.0mm and 1.2mm guage thickness of steel, and comes in 3 profiles; the traditional dovetail re-entrant MetFloor 55, the long-span trapezoidal MetFloor 60, and the ultra-long span trapezoidal MetFloor 80. CFD’s MetFloor range of decking can be manufactured with or without crushed ends, can be cut on or offsite, and is manufactured alongside the steel edge trim and CSC steel shear studs used by Studwelders for through-deck welding. Studwelders’ installation teams installed the decking, shear studs, edge trim and safety netting to the 3 floors of the structure during early 2018.

Romo Group is a family run, 5th generation, British business based in Nottinghamshire, and designs and produces 6 unique brands of luxury fabrics, wallcoverings and trimmings. It was founded in 1902 as a small furniture manufacturing business, and became a design-led company over time. They won the Queen’s Award for Enterprise: International Trade in 2008 and 2017, for vastly increasing their exports across the globe, such that exports made up a staggering 72.5% of the business. Romo Group recently expanded their US operations and flagship London showroom, so decided to consolidate their 4 different sites into a single HQ.

Their new £30M, 30,000m2 HQ, designed by architects Maber, will have 250,000 sq ft of warehouse space and 60,000 sq ft of offices, design rooms and showrooms. It will employ 285 staff and the warehouse will be state-of-the-art and automated, storing over 250,000 rolls of fabric and wallcoverings. The layout of the building consists of three main elements: offices, an atrium and a warehouse. The façade was designed to be clean and crisp, with a limited colour pallete, at the behest of Romo Group. During construction, the exacavations for the concrete base were extensive, meaning that the bedrock had to be drilled into to a depth of 4m in some places, to allow strong foundations for the holding-down bolts that the steel columns of the framework sit on. The site underwent extensive landscaping post-construction, including the planting of numerous trees, to improve the aesthetic of the surrounding environment. Romo Group were welcomed into their new HQ in 2018.