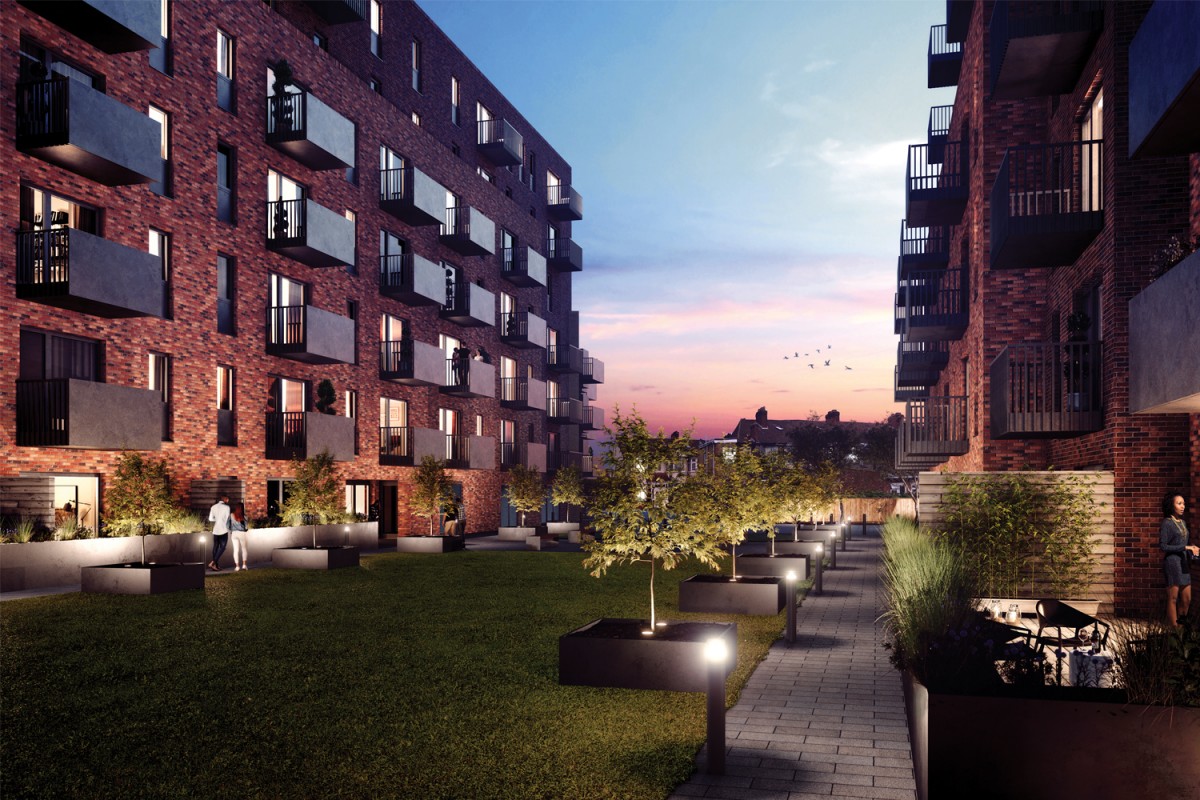 Studwelders Composite Floor Decks installed almost 10500 square metres of MetFloor 60 and almost 3500 square metres of MetFloor 80 steel decking and all the concreting works on The Metalworks luxury apartment developments in Slough.
Built on a compact former brownfield site 200 metres away from the new Elizabeth line station, the 2 physically articulated blocks, Iron House and Steel House made very extensive use of steel during their construction.

The Metalworks is the latest residental scheme to spring up in Slough as residents flock to the Berkshire town, due to the arrival of the Elizabeth line connecting it to central London just 20 miles away, the rapidly progressing £450M leisure and retail “Heart of Slough” programme, and the high numbers of corporate headquarters based in the town, second only to London. The Metalworks consist of 2 luxury apartment blocks in central Slough; Iron House and Steel House, which will contain 155 apartments, sat on top of a shared basement car park. Each building will consist of seven storeys above basement level (including the ground floor) and will offer residential properties in a range of studio and one to three bedroom flats, and both buildings are due to be completed by July 2020.

The main contactor in the Metalworks scheme was Colmore Tang, whilst Mifflin was the steel contractor. Steelwork was used extensively throughout the development, starting at basement level because the subterranean level covers the majority of the site’s footprint. A podium deck covers the basement car park and supports the two residential blocks and the courtyard between them. The podium’s steelwork is based around a larger column spacing in the car park (spans of up to 10m – MetFloor 80 decking) than the above residential areas, where spans are predominantly 6m and 8m long (MetFloor 60 decking). The project’s steelwork supports metal deck flooring throughout, as this was deemed to be the most efficient design: “Initially we were going to use precast planks for the floors, but this design would have needed many more crane lifts for the individual precast units. We may have slightly more steelwork in the frames to support the metal decking, but this solution has given us not just a quicker programme, but also a safer and easier solution.”

Work commenced on the former brownfield site in May 2018, demolishing existing buildings and then installing steel piles and excavating the basement, prior to beginning the steel erection programme. It was estimated some 3,275 individual steel pieces were erected during the scheme. The structural steelwork programme was completed in June. The Metalworks plot is a logistically challenging site, as it is hemmed in by existing residential buildings on three sides, with only one access point to a busy thoroughfare. Both Iron House and Steel House have similar designs, with the main difference being the latter structure is slightly longer than its neighbour. Stability for the blocks is provided by cross bracing, predominantly located in the steel cores. While Iron House has one central core, Steel House has two cores, one containing a lift and stairs and serving all of the building’s floors, and another stair core that serves levels one, two and three. Each of the blocks feature a number of set-backs, giving the otherwise rectangular buildings some architectural interest. The buildings will be clad with brickwork, and 90% of the apartments will have balconies installed.

Studwelders role in this project was great, as it was responsible for installing almost 10,500m2 of long span trapezoidal MetFloor 60 steel decking, and almost 3500m2 of ultra-long span trapezoidal MetFloor 80 steel decking to the buildings over their 7 stories. Delivery of the steel decking to the site commenced in February 2019, whereupon the Studwelders installation teams set up FASET-compliant safety netting across the steel framework and began installation of the steel decking During the course of the project, almost 12,000 steel shear studs were welded to the structure. Both the shear studs and the MetFloor decking were manufactured by CMF, with the final load being delivered to site in July 2019.

The design of the building specified the more efficient metal decking for the spans between columns, rather than pre-cast concrete slabs. This meant that in order to create the smooth floor surface above the decking, steel mesh and concrete was added on top of the decking by the Studwelders team in order to create a composite concrete+steel floor decking system, used throughout the entire construction, to create a quicker, easier and safer solution to the project. Apart from in the composite floor decks laid down by SCFD, very little concrete was used in other sections of the project.

The buildings will now undergo brickwork cladding, balcony attachment and extensive fitting-out ready for the first residents to move in during mid-2020.