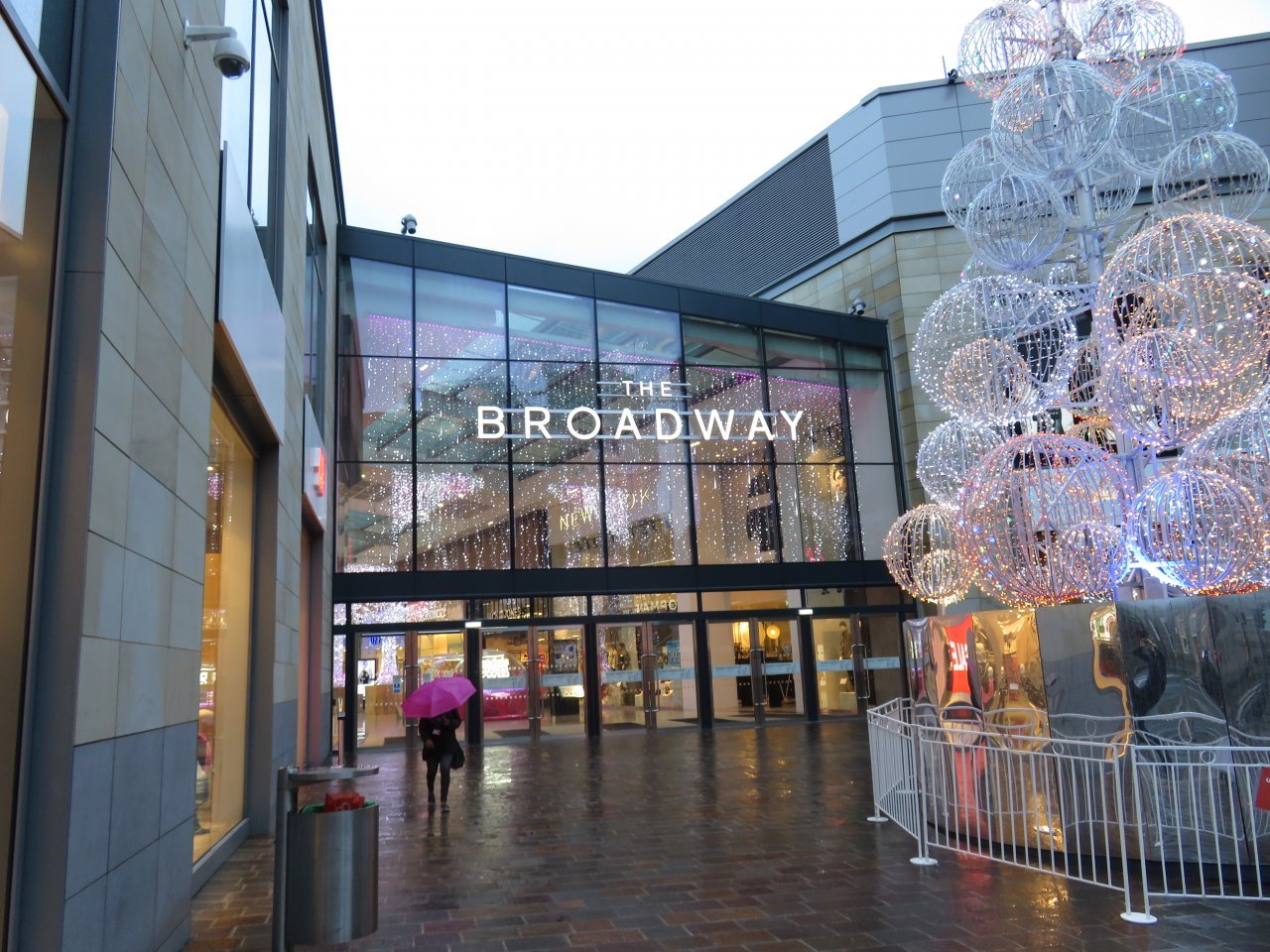 Composite Metal Flooring manufactured nearly 100,000m2 of MetFloor 55 and MetFloor 80 in what was then their 2ndlargest ever contract - The Broadway shopping complex in Bradford.
The mammoth development had started in 2007, but was subsequently put on hold by the owner, Westfield. After construction resumed in 2014, Studwelders Ltd started their installation of the deck in March 2014.

The development of a new shopping complex to re-vitalise the centre of Bradford in West Yorkshire was first proposed in 1998. Planning permission was granted in 2003, and demolition of the old units on the site began in March 2004. Westfield, the developer and owner of Westfield Stratford and Westfield London (both of which have been worked upon by CMF and Studwelders Ltd), took over the scheme in December 2004, and by 2006, all existing units on the site of the shopping centre had been demolished. Construction was ready to begin in 2007, the Great Recession led to a bearish economic outlook amongst the developer and amongst potential tenants, who were cautious to commit to the project at a time when many retail chains were cutting jobs and closing stores across the country. The site had been fully excavated by 2009, but the project was put on hold until market conditions improved. The lack of development on the inner-city site led the Broadway to be given the derisory nickname of “the hole in the ground” by Bradford residents.

Westfield then submitted new plans to Bradford City Council in 2011, and construction was announced, in 2013 to resume in January 2014. After years of inactivity, The Broadway was then erected at a lightning rate, with the construction of the structural steel framework having advanced sufficiently by March 2014 to allow Studwelders Ltd to begin their installation of MetFloor steel decking. Severfield was responsible for the construction of the steel framework, amd steel-braced cores of the development.

The original design for the complex had included less steel, opting instead for a more concrete-based superstructure. This was changed, as it was far quicker to erect a steel-based structure, and it would also allow for any alterations to the design of the complex mid-project (of which there were a few). The entire 6,800t steel frame was erected in 25 weeks, and primary steel contractor Severfield had completed construction by September 2014. Severfield’s approach to the 10-acre site had been to work through it systematically, constructing one building at a time. This allowed for them to focus their resources on each individual building, ensuring its speedy construction, and then move on, so that the next construction teams could develop each building in their wake. In effect, this methodology turned the vast construction site into a giant production line.

Needless to say, the next contractor to tackle the project was Studwelders Ltd. Once Severfield had constructed the steel framework to each building, whether that was the central shopping centre, or one of the two anchor stores (M&S and Debenhams), Studwelders Ltd followed behind, installing the steel decking, edge trim, shear studs and safety netting to the site.

The use of such a large amount of steel in the project can be directly attributed to Westfield’s endorsement of steel as an excellent building material for construction projects such as The Broadway, as it allows for easy alterations in the middle of the project, and can be pre-fabricated and pre-cut off site, unlike concrete; which allows for quicker construction. As Bradford is located within Yorkshire, the county responsible for many innovations associated with the manufacture of steel, and, indeed, historically responsible for much of the United Kingdom’s steel production; Westfield’s choice of steel as the primary construction material was very apt.

Studwelders Ltd installed 94,346 square metres of steel decking on the Yorkshire shopping complex. Two types of MetFloor steel decking were used – the traditional dovetail re-entrant MetFloor 55 steel deck, and the more modern trapezoidal MetFloor 80 steel deck. MF55 decking compromised approximately 70,000 square metres of the decking installed on the project. Commonly used in British construction, it is known for its great reliability and has been favoured in many projects since the 1970’s. MF80 steel decking is a more modern design, being trapezoidal. It has a greater span capacity and load resistance than MF55. Both, however, are manufactured in 600mm width sheets, allowing easy manipulation upon the construction site. This may have contributed to the speed with which the steel decking was installed on the site, as the studwelding teams had no ungainly large sheets of metal to haul around the construction site. The studwelding teams also installed steel edge trim. This was also manufactured by Composite Metal Flooring, along with the MetFloor steel decking. Studwelders installed over 250,000 steel shear studs on the behemoth project, as well as putting up FASET-compliant safety netting onsite.

Composite Metal Flooring manufactured this vast order of steel decking and steel edge trim for use on The Broadway. At the time of construction, CMF had four production lines, and this project utilised all except for the MF60 line. Manufacture of the steel deck began in March 2014, and proceeded over the next 10 months. The steel deck and edge trim were then transported from CMF’s state-of-the-art production facility in South Wales, using a local haulage company; Gerry Jones Transport, up to Yorkshire, where the steel would be installed onsite. The order of nearly 100,000m2 of steel decking was completed in January 2015.

Studwelders Ltd completed their installation of the deck shortly afterwards, having rotated across the 10-acre site over the previous 10 months, to lay the steel deck over each successive newly-constructed building. Studwelders Ltd did more than just install the steel deck, however. Studwelders Ltd also laid down the steel mesh over the deck, before pumping concrete atop the deck, or used their mesh-less Fibredeck concrete system, which contains metal strands and fibres, to improve the resiliance of the concrete, increasing the tension of the composite floor, and removing the requirement for a steel mesh. By the time Studwelders had completed their contract, they had installed the steel deck, steel edge trim, steel shear studs, and concreted over it all, to provide a strong and secure composite floor combination of concrete and steel, renowned for its resiliance, tension, and flexibility.

4 months after Studwelders Ltd left the site, construction at The Broadway was 75% complete. Finally, in November 2015, after final fit-outs by the 73 retail units, The Broadway opened in Bradford. The new shopping complex has re-vitalised the centre of the Yorkshire city, offering 577,000 square feet of retail space to numerous shops and restaurants. The 2 anchor stores to the development are Debenhams and Marks & Spencer, but there are many more well-known brands and stores populating the shopping centre. Some of these stores include Clarks, Boots, H&M, Next, New Look, River Island, Superdry, Swarovski, Topshop and WHSmith, as well as many other stores, some of them luxury brands housed within the larger Debenhams triple-storey complex. The complex is now also home to many popular restaurant chains too, to provide the full shopping-dining experience that is desired in the 21st century.

It is hoped that the contribution that The Broadway has upon Bradford is long lasting, and doesn’t end with the one shopping complex. Indeed, the influx of capital from the development has led to grants being made availible in Bradford for other new developments within the Yorkshire city. Most interestingly of all, however, is what the future may hold for The Broadway itself! The foundations, constructed prior to the Great Recession, were re-inforced to deal with the added strain of additional floors being added to the top of the shopping complex. These floors were supposed to contain two residential complexes, and one office block of up to four storeys. When the steel framework was being constructed in 2014, allowance for these future developments was made by using thicker steel girders, to counteract the extra weight. This allows for, one day, these additional schemes to go ahead. In short, this may not be the last you will hear of The Broadway, Bradford, and it may not be the end of Studwelders Ltd’s and CMF’s involvement with the landmark regeneration of Bradford City Centre.