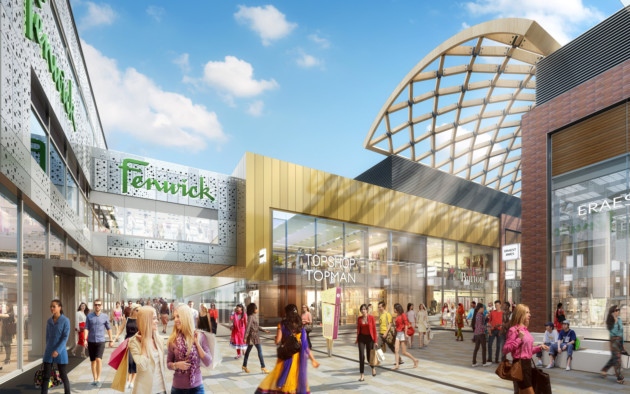 Composite Metal Flooring manufactured over 38,000m2 of MetFloor 55, MetFloor 60 and MetFloor 80 for use in Bracknell's re-generation and re-development of the town centre.
Studwelders Ltd installed the steel decking over an 18 month period, from June 2015 to November 2016, in the new central shopping complex in the Berkshire New Town.

First proposed at the turn of the millenium, the long-awaited regeneration of Bracknell town centre will be completed in September 2017, with Composite Floor Decks having contributed 38,271m2 of steel decking to the project. Bracknell was built after the war, as a New Town, but by 2014, the pre-dominately 1960’s town centre was run down. An ambitious project then began to transform the town centre into a modern shopping complex, with work beginning in March 2015.

Once demolition of the old units was complete, construction began on the site. Composite Metal Flooring manufactured the first lot of stell decking in June 2015, and continued to deliver MetFloor steel decking to the site until November 2016. The project required over 38,000m2 of both traditional re-entrant MF55 deck, and trapezoid MF60 and MF80 deck. The decking was installed by Studwelders Ltd. Studwelders Ltd also installed steel edge trim, steel shear studs, and FASET-compliant safety netting to the shopping complex in Berkshire.

The shopping centre opens in September 2017, and contains an array of stores and restaurants. The anchor stores of the complex include Marks and Spencer, Waitrose, Primark, Fenwick and Sainsbury’s. Other major stores include Next, H&M, Topman and Superdry. The new development, the Lexicon, bucks the trend to construct Out-of-Town shopping complexes, as the construction is taking place in the heart of the town. When it opens on 7th September 2017, it will host 580,000 square feet of retail space, after the £240 million re-development.