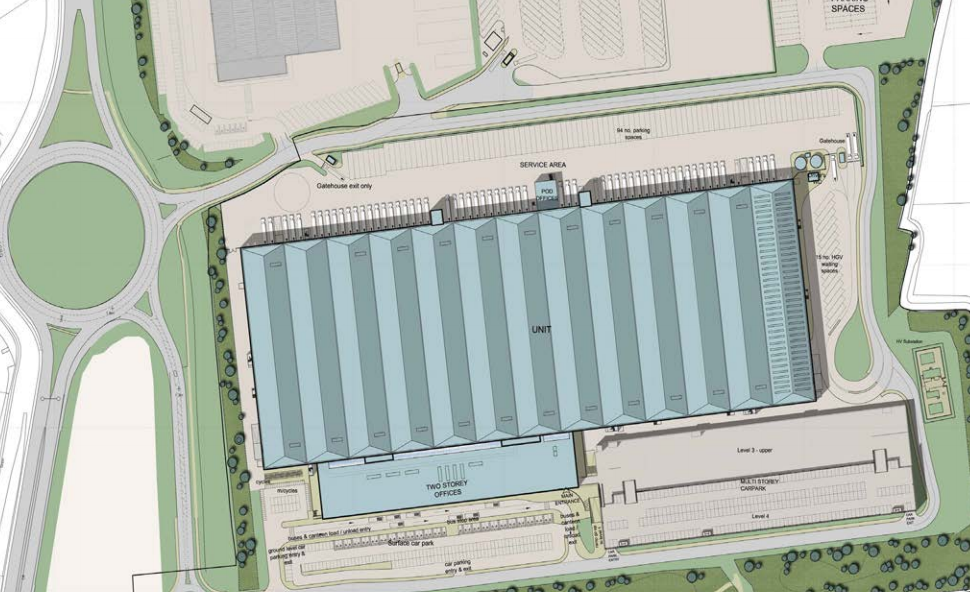 Composite Metal Flooring supplied over 150,000m2 of MetFloor 60 to Amazon's 13th warehouse in the UK from October 2016 to March 2017.
Studwelders Ltd installed the steel decking, steel edge trim, steel shear studs, safety netting and concrete to the "fulfilment centre" in the London Distribution Park, near the Port of Tilbury; part of the Port of London.

Amazon’s Tilbury “fulfilment centre” offers the online retail giant over 2 million sq ft of space in close proximity to the capital. It forms part of the London Distribution Park, between the Port of Tilbury and Grays Thurrock. The 22m high warehouse contains 4 floors with a 550,000 sq ft floor plate. These floor plates are a composite contruction of steel and concrete, and were manufactured and installed by CMF and Studwelders Ltd.

Due to the sheer size of the warehouse, 150,000m2 of the trapezoid MetFloor 60 steel decking was required. Much of this decking was to be used in constructing the composite mezzanine floors of the warehouse, but some was to be used in the construction of the adjoining office block and car park. This order of decking made it CMF’s largest contract since 2008-10, at the time of fulfilment, as nearly 12,000 additional square metres of steel decking were required in relation the previous title-holding contract, the Westfield London shopping centre. The size of this contract puts it in second place to Westfield Stratford City.

Manufacture of the deck began in October 2016, and lasted for 6 months. The rate of production at CMF’s Mamhilad facility was unprecedented, with, on average, 25,000m2 of decking being manufactured every month. On average, over 1000 square metres of steel decking was being manufactured every working day for 6 months. On top of that, CMF was simultaneously manufacturing steel edge trim and steel shear studs for the warehouse too. Over 400,000 steel shear studs were used in the construction of the depot. Most of the decking had left CMF by March 2017, but one last load of 97 additional square metres was delivered in July 2017, to construct the back of the office block.

Studwelders Ltd installed the steel decking, edge trim, shear studs and safety netting onsite, before concreting over the steel deck, to create composite mezzanine floors for the warehouse. The use of composite mezzanine floors in the contruction of the warehouse massively speeded up their installation, so that Studwelders could complete their contract quickly and efficiently. The warehouse itself measured 140m by 370m, and was accompanied by a two-storey, 100,000 sq ft office block, a four-level decked car park, with space for 2000 cars, and a service area for 94 lorries. The main warehouse opened in Spring 2017, and offered 1500 jobs. It forms part of the wider Thames Gateway revitalisation project, which encompasses the London Distribution Park, the DP World London Gateway port, and the Port of Tilbury, amongst many other regeneration and development projects on the lower Thames.