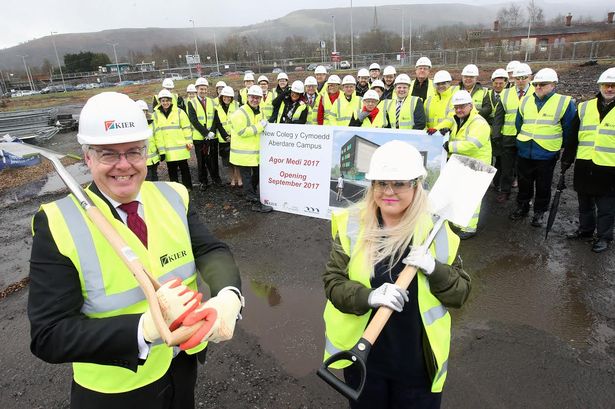 The construction of Aberdare’s new £22m Coleg y Cymoedd campus is officially underway as the First Minister of Wales ‘broke the ground’ at the new site.

Carwyn Jones visited the Robertstown site on Wednesday, March 2, where a state-of-the-art new building – jointly funded by Coleg y Cymoedd and the Welsh Government – will replace the college’s existing Cwmdare campus from September 2017.

The 2.7-acre site is a stone’s throw from Aberdare Railway Station, the town centre and the new Aberdare Community School, and is intended to provide learners and staff with significantly improved access to public transport and commuter links.

Construction learners from Coleg y Cymoedd, who will benefit from work experience on-site throughout the development, were also guests at the site.

Mr Jones said: “It gives me great pleasure to cut the first turf of what will, in time, turn into an ultra-modern, highly efficient learning centre right in the heart of Aberdare.

“We are absolutely committed to providing our learners with state of the art facilities in inspiring surroundings that encourage them to fulfil their potential.

“That’s why we are investing £11m in this development as part of our £1.4bn 21st Century Schools and Education programme, which is transforming schools and colleges across the length and breadth of Wales.

“This construction will also provide numerous employment opportunities and will be a much-welcome boost for the local community.

“I very much look forward to returning to Aberdare to see the new campus when it is completed.”

Plans for the site include the refurbishment of an existing disused railway station building, while a 133-space car park served by an existing access will be built.

She added: “This is a hugely exciting project and it is fantastic to have Welsh Government support along the way.
Excellence in education

“We are committed to providing learners with the very best facilities and development opportunities, and thrilled the First Minister could join us at today’s event marking the first stages of construction.

“The new campus will exemplify Coleg y Cymoedd’s mission to make excellence in education and skills development a reality for all learners in the communities we serve, in particular changing the face of post-16 education in the south Wales valleys.”

Jason Taylor, operations director at construction contractors Kier Construction, added: “Today is a very special occasion for everyone involved in the delivery of the new campus.

“There has been a great team effort to get to this point and we very much look forward to getting started on site.

“We are delighted to be delivering these state-of-the-art facilities which will be enjoyed by students of the future and the local Aberdare community.”

The new Aberdare campus, which received planning permission in December, will offer 800 students a variety of courses such as business administration, plumbing, construction and children’s care.