Composite Floor Decks group supplied and installed nearly 160,000m2 of Metfloor 55 to 22 Bishopsgate in the City of London, the largest project for the group this decade.
Upon completion, 22 Bishopsgate became the 2nd tallest building in the United Kingdom, at 278m and 62 storeys, and contains an unprecedented 1.275 million sq ft of office space, the highest figure of any building in the City.

Work at 22 Bishopsgate began in June 2007, when the previous buildings on-site were demolished. After a few set-backs, demolition was finally completed in June 2008. At the time, the building that would have been built was nicknamed “The Helter-Skelter”, in reference to the spiral design of the tower. The owners of the development then renamed the tower “The Pinnacle”, as the original design culminated in a grand spire. Cranes arrived onsite in May 2008, waiting for construction to begin. Construction began, and the foundations were laid in 2008/9. Concrete piles 65.5m deep had been sunk into the ground, which broke the record for the deepest piles ever set in the UK. In 2009, excavation of the site began, so that the foundations could be constructed. However, the Great Recession hit, and constuction was put on hold.

In 2011, construction resumed, and the concrete core rose to six storeys. However, construction was terminated in March 2012 once again. In 2013, the building was re-designed, to try and make construction more economical and affordable. The building was sold in 2015 to AXA, who proceeded to completely re-design it in the same year. The new, current design, was named “22 Bishopsgate”, and reached a height of 278m. The original concrete core was demolished in December 2015, and construction of the new core began in January 2016.

TwentyTwo is located in the east of the City, adjacent to ‘The Cheesegrater’, ‘The Gherkin’ and ‘The Scalpel’ and near the Elizabeth Line station of Liverpool Street. The building’s main superstructure is comprised of a steel-framed tower with a central concrete core. Each floor was constructed from MetFloor steel decking and concrete, to produce a lightweight composite flooring system for all 62 storeys of the tower. Lightweight concrete mixes had to be poured higher than they ever had before in London, shattering the previous record of 50 storeys high in Canary Wharf. The glass used on the exterior of the skyscraper is of exceptional clarity and brilliance, to reflect the sky, reduce visual interruptions to outsiders and allow more natural light into the tower.

Construction was complicated by access constraints, designated ‘quiet times’ and the huge volume of materials required. An off-site consolidation centre was set up to reduce traffic and synchronise deliveries. Materials were distributed at night to avoid traffic congestion and to allow workers arriving on-site to start work immediately, whilst also reducing delivery vehicles at peak hours.

The steelwork contractor for the project was Severfield, who were responsible for constructing the steel framework around the concrete core. Severfield faced some obstacles whilst working on the lower floors of 22 Bishopsgate, as the construction site was extremely constricted, with the contractors not allowed to encroach upon the road next to the site. This meant that it was very difficult to attach steelwork to any higher floors once the steel had been erected on the lower floors. To solve this problem, they used a ‘wonky’ crane. The initial section of the crane is angled away from the building, and is anchored at the top to the overhanging steelwork of one of the lower floors. The rest of the crane then operates as normal, angled towards the building, but stemming from that anchor point on the side of the building’s steelwork. The crane is visible in the picture gallery below, but only the first section had been assembled at the time of the picture, meaning that the rest of the crane is not visible below. At one point, over 1500 tons of steel and 2000m2 of steel decking was being installed in the tower by Severfield and Studwelders every week.

Studwelders Composite Floor Decks was contracted to manufacture and install MetFloor steel decking, steel shear studs, edge trim, concrete and safety netting to the project, and maintained a presence at Bishopsgate for 2.5 years, until late 2019. In that time, they completed the behemoth task of installing 159,000m2 of MetFloor steel decking, as well as welding about 360,000 steel shear studs to the tower. They also attached steel edge trim to the twenty-three-sided tower. Not only that, but Studwelders Ltd will also have to attach extensive safety netting across the entire site, to ensure safety on the skyscraper. Attaching the netting to higher floors posed new challenges to Studwelders, who had never before worked on a building of this height. The volume of the steel decking installed made TwentyTwo the largest project for CFD this decade.

Construction Metal Forming manufactured the MetFloor 55 steel decking for the skyscraper. Using their Mamhilad production facility, CMF manufactured 159,000 square metres of the dovetail re-entrant decking. Manufacture began in January 2017, and lasted until 2019, with the final decking delivered in April 2019.

22 Bishopsgate was modelled and detailed using the latest version of Tekla Structures (3D CAD) software. This allowed Studwelders Composite Floor Decks to import, and work directly from, the Steelwork Fabricator’s 3D model and build upon that with the metal decking system. Working in the 3D environment allowed identification of issues at the earliest opportunity, such as missing supports or clashes with other components, leading to a streamlined design process throughout. Due to the accuracy of the 3D model, all metal decking and associated components were able to be detailed and manufactured with a high level of accuracy, allowing all material to be cut off-site to suit the exact site conditions, thus allowing minimal cutting and waste on site.

Managing Director at Studwelders Composite Floor Decks Ltd, Clive Philips, said: ‘The installation of this particular project was challenging to say the least, from strictly co-ordinated deliveries right through to decking installation in the night time in some phases. Shear stud welding again had to sometimes be carried out far into the night when the risk to members of the public had reduced, and detailed decking install phases with very tight durations had to be maintained in order to allow for steel deliveries to take place.’

22 Bishopsgate now provides over 2 million sq ft of gross floor space, 1.275 million sq ft of which is dedicated to office space, the largest such amount of any single construction in the City, and will house up to 12,000 workers when fully leased. Described as a ‘vertical village’, the tower will house multiple, smaller tenants, and will feature state-of-the-art technology and extensive facilities to accomodate the different needs of each. The 62-storey tower will be the first of its kind to house a fresh food market, an innovation hub, a gym with a climbing wall, a spa, a business club, a restaurant, 1700 cycle spaces and London’s highest free public viewing gallery, as well as being the first UK tower to contain over of 100,000 sq ft of amenities and social spaces. The tower will contain multiple pieces of artwork, have Europe’s fastest double-decker lifts and contain a range of different technologies such as facial recognition, smart blinds and QR entry codes. 22 Bishopsgate is the largest project by floor area in the UK to be registered for WELL certification, and it was designed to achieve a BREEAM Excellent rating. 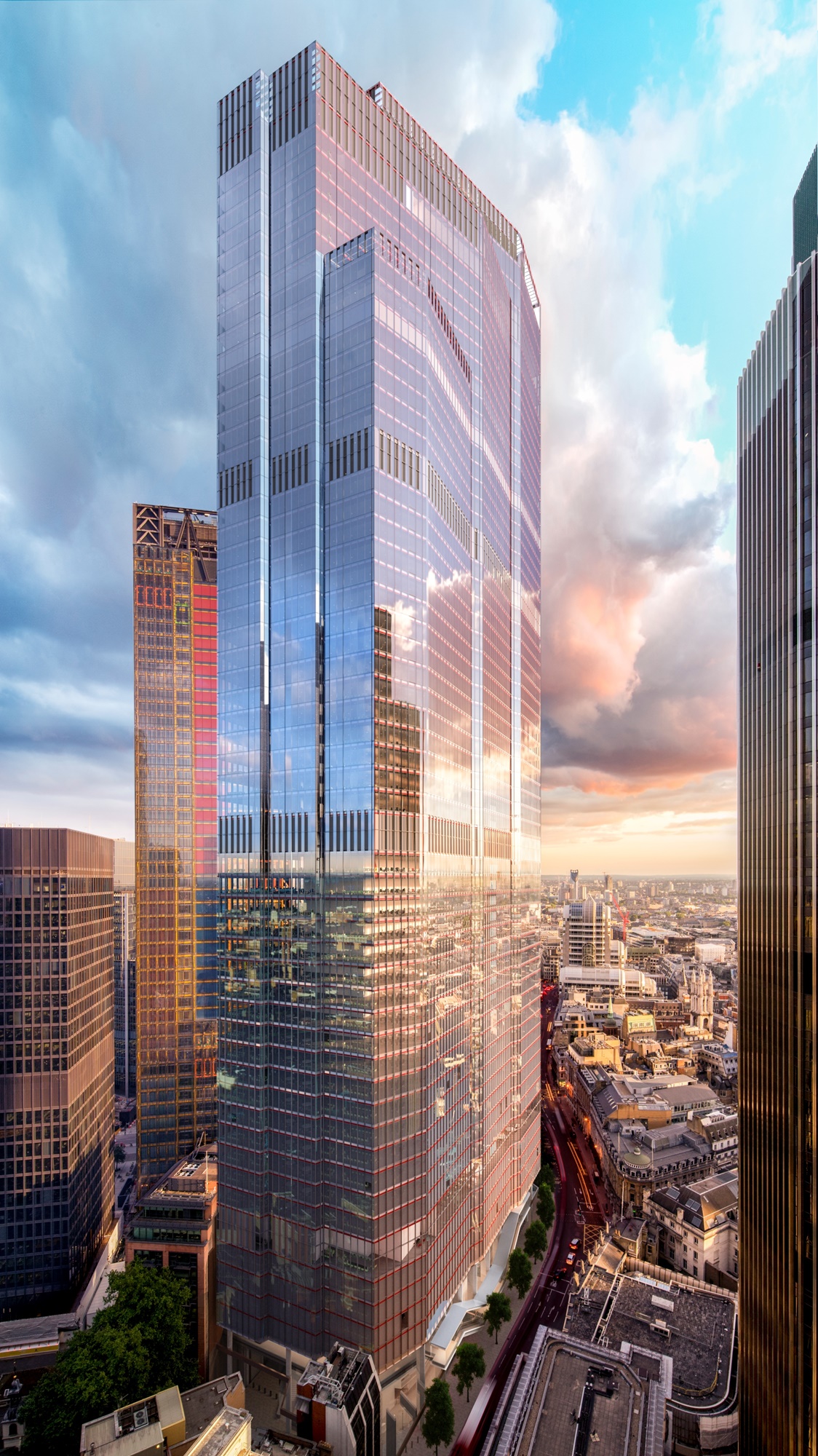